Frank, Robert The lines of my hand 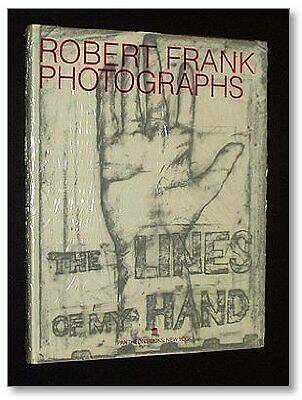 Title: The Lines of My Hand

Pantheon Books, New York, 1989. 182 pp., 340 duotone and 12 color photographs,, 9x12".
Robert Frank's autobiographical The Lines of My Hand, considered by many to be one of the most important photographic books of the 20th Century, was first published in Japan in the early 1970s as a deluxe, slipcased edition. In 1972 it was issued as a paperback edition by Lustrum Press, New York. The original edition is one of the scarcest of Frank's books and, if found, commands a rare-book price. This new edition, simultaneously published in Europe, contains many of Frank's photographs reproduced in the earlier editions--in some cases totally re-edited--along with much that is new. Including enlargements from his recent self-exploratory videos, multiple Polaroids, and other narrative works. Beautifully produced, this edition does justice to Frank's continuing reputation as one of the great artists of our time.