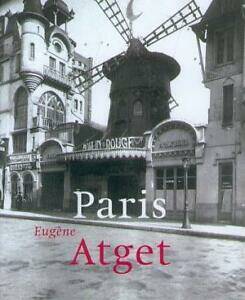 Unraveling the mystery of Eugene Atget's life and work (1857-1927) is easier said than done. Now considered to be one of history's most important photographers, Atget (1857-1927) was relatively unknown until well after his death. We know that he made his living selling his prints, mainly to architects, artists, and institutions, but his categorical, obsessive method of photographing Paris street by street (doorknob by doorknob in some cases) lacks clear explanation.

Atget wrote in 1920, ""I may say that I have in my possession all of Old Paris"". Indeed, he knew the city like the back of his hand and had the pictures to prove it. He captured the historical, atmospheric Paris: churches, monuments, and buildings, as well as bars, shop windows, street-peddlers, and prostitutes. Traversing all of its layers, he immortalized the true spirit of Old Paris.

Why did he choose to spend his life roaming the streets with his heavy camera equipment, systematically cataloguing everything Parisian? The answer, if it can be discovered, must be found in the pictures themselves. Whether he intended to or not, Atget has left us with an impeccable record of turn-of-the-century Paris, not to mention a huge collection of stunningly beautiful photographs. This new book features 200 of Atget's most impressive images, many of which have rarely been seen before. Take a trip back in time and immerse yourself in Atget's Paris.