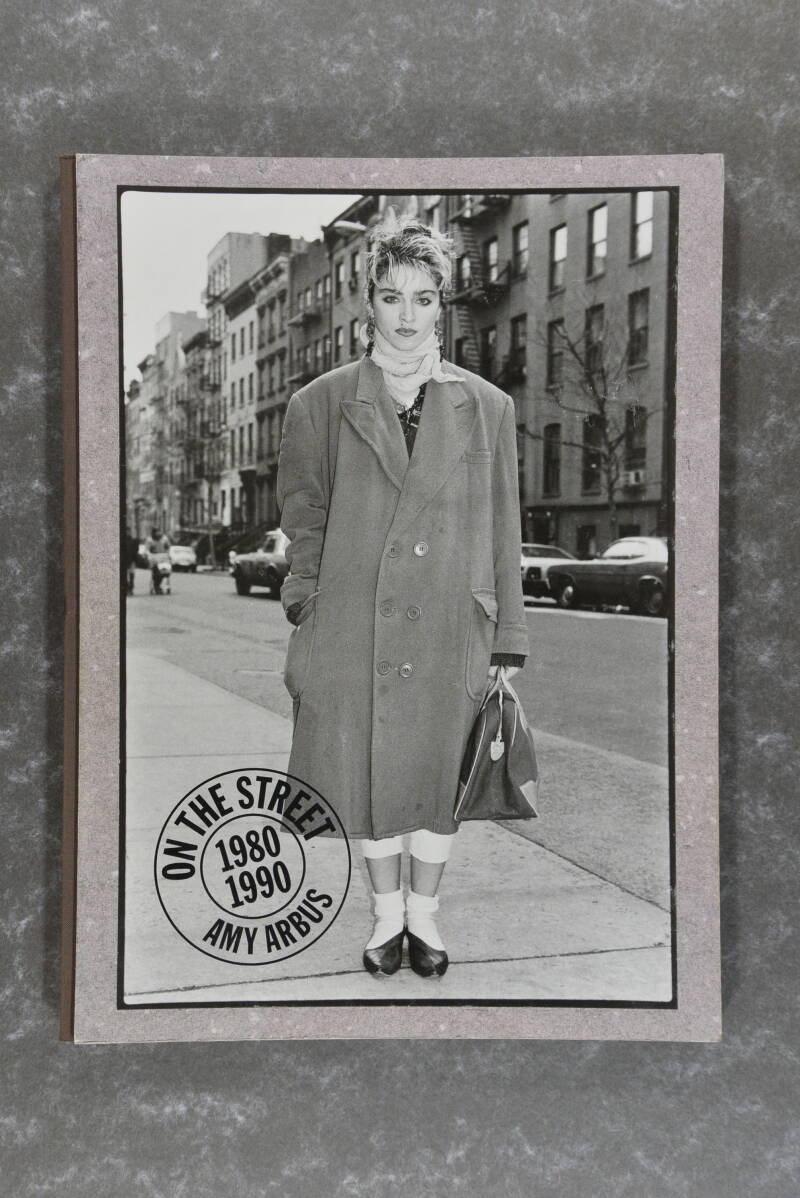 Between 1980 and 1990, over five hundred of photographer Amy Arbus's impromptu and edgy portraits of New Yorkers appeared in the Village Voice's monthly fashion feature, "On the Street." The column's missive was to document the city's most adventurous trednsetters as they lived their lives. But Arbus's photographs tell much more than a style story. From the friendliest to the grittiest, every one of these images is a potent tribute to self-expression. Taken as a whole, they reflect an era of contradictions, a time in America when urban individualism and raw creativity were courageously fighting for breathing room and holding their own in a culture ruled by wealthy conservatism and Republican politics.

For the first time since that hard-to-define decade, this time-capsule collection of images is being revisited. On the Street features seventy of the most revealing and expressive images taken by Arbus on the city’s fashion-fertile sidewalks. From the unknown to the unmistakably famous, her subjects are all equally unforgettable. Arbus’s ubiquitous lens captured the most influential style-makers, from The Clash on the set of Martin Scorsese's King of Comedy and Madonna on the same day her single “Everybody” hit the charts, to Anna Sui, Joey Arias, Phoebe Legére, and countless other local artists, actors, costume designers, shop owners, musicians, make-up artists, graffiti artists, and downtown scenesters. From eyewear to underwear and schoolgirl skirts to backless shirts; from women dressed like men to men that are barely dressed; from lipstick to just plain “schtik,” there is no aspect of 80’s style that goes unrepresented.
A. M. Homes, the renowned author of The End of Alice and contributing editor at Vanity Fair, offers a personal and illuminating essay that introduces and celebrates Arbus’ photographs, while elegantly placing them in the context of the time in which they were taken.

Amy Arbus has been photographing professionally for twenty-four years. She is a contributing photographer to New York Magazine theater section. Her photographs have appeared in over one hundred periodicals around the world including The New Yorker, Aperture, People, ESPN and The New York Times Magazine. Her advertising clients include American Express, Nickelodeon, Saatchi & Saatchi, New Line Cinema, Christiano Fissore, and The California Children and Families Commission. Her first book, No Place Like Home, portraits of people who live in unusual homes, was published by Doubleday & Company in 1986. Her second book, The Inconvenience of Being Born, a photo essay on the extreme emotional nature of infants, was published by Fotofolio in 1999 and received an Award of Excellence from Communication Arts. She teaches portraiture at the International Center of Photography, The Fine Arts Work Center and The Toscana Photographic Workshops. Her most recent exhibition was at the Schoolhouse Gallery in Massachusetts. She has had thirteen one-woman exhibitions worldwide, and her photographs are a part of the collection of The Museum of Modern Art in New York.
A.M. Homes is the author of the novels The End of Alice, In a Country of Mothers, and Jack, as well as the short-story collection The Safety of Objects and the artist's book Appendix A. Her fiction has been translated into eight languages, and she is the recipient of numerous awards, including a Guggenheim Fellowship and a National endowment for the Arts Fellowship. Her fiction and nonfiction appear in magazines such as The New Yorker and Artforum, among others, and she is a contributing editor at Vanity Fair, Mirabella, Bomb, Blind Spot, and Story. She teaches in the writing programs at Columbia University and The New School and lives in New York City.