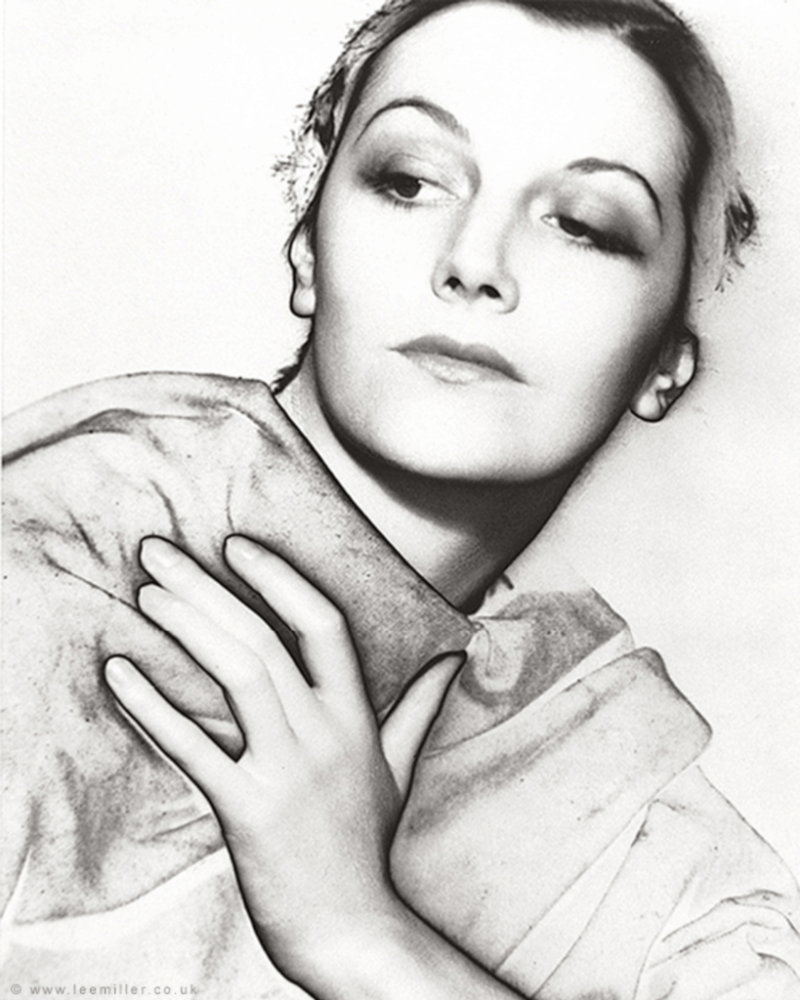 Beautiful platinum print from the collection
of The Lee Miller Archives.
The Nielsen frame is included when picked up at our gallery in Utrecht.

Lee MILLER first entered the world of photography in New York as a model to the great photographers of the day such as Edward STEICHEN, HOYNINGEN-HUENE and Arnold GENTHE.

In 1929 she went to Paris and worked with the well known Surrealist artist and photographer Man RAY, and succeeded in establishing her own studio. She became known as a portraitist and fashion photographer, but her most enduring body of work is that of her Surrealist images. She returned to New York in 1932, and again set up her own studio which ran for 2 years and was highly successful. It closed when she married a wealthy Egyptian businessman Aziz ELOUI BEY and went to live with him in Cairo, Egypt. She became fascinated by long range desert travel and photographed desert villages and ruins. During a visit to Paris in 1937 she met Roland PENROSE, the Surrealist artist who was to become her second husband, and travelled with him to Greece and Romania. In 1939 she left Egypt for London shortly before World War II broke out. She moved in with Roland PENROSE and defying orders from the US Embassy to return to America she took a job as a freelance photographer on Vogue.

In 1944 she became a correspondent accredited to the US Army, and teamed up with Time Life photographer David E. SCHERMAN. She followed the US troops overseas on D Day + 20. She was probably the only woman combat photo-journalist to cover the front line war in Europe and among her many exploits she witnessed the siege of St Malo, the Liberation of Paris, the fighting in Luxembourg and Alsace, the Russian/American link up at Torgau, the liberation of Buchenwald and Dachau. She billeted in both Hitler and Eva Brauns houses in Munich, and photographed Hitlers house Wachenfeld at Berchtesgaden in flames on the eve of Germanys surrender. Penetrating deep into Eastern Europe, she covered harrowing scenes of children dying in Vienna, peasant life in post war Hungary and finally the execution of Prime Minister Lazlo Bardossy.

After the war she continued to contribute to Vogue for a further 2 years, covering fashion and celebrities. In 1947 she married Roland PENROSE and contributed to his biographies of PICASSO, MIRÓ, Man RAY and TÀPIES. Some of her portraits of famous artists like PICASSO are the most powerful portraits of the individuals ever produced, but it is mainly for the witty Surrealist images which permeate all her work that she is best remembered.

The black line around the outside of this image is a photographic technique called solarisation (aka the Sabatier reaction), that Lee Miller re-discovered by accident in the darkroom whilst developing some negatives. She shared her findings with the Surrealist artist, Man Ray, her lover, and in her early days in Paris, her mentor. Excited by the discover,y they both worked on it to find ways of replicating the result and controlling the process. From this point on they both used solarisation in their work, sometimes collaorating on projects too. Sadly Lee is often forgotten when the technique is discussed and only Man Ray is credited, despite more recent texts by well respected photo historians and curators attempting to redress the balance.

"Surrealist Lee Miller", the retrospective dedicated to one of the most important photographers of the twentieth century, comes to Italy for the first time. The exhibition consists of 101 images that trace the entire artistic career of the photographer, through her most famous and iconic shots. Launched by Condé Nast on the cover of "Vogue" in 1927, Lee Miller immediately became one of the most popular models in the fashion industry. Miller started traveling to participate in photo shoots that became history, until, two years later, she decided to move over the other side of the camera and become a photographer herself. Struck by the images of Man Ray, one of the most important Surrealist photographers, she was able to meet him, and immediately she became his muse and above all collaborator. Together they developed the solarization technique. A friend of Picasso, Ernst, Cocteau, Miró and the entire surrealist clique, after her time in Paris, Lee Miller decided to return to New York and opened her own photography studio.