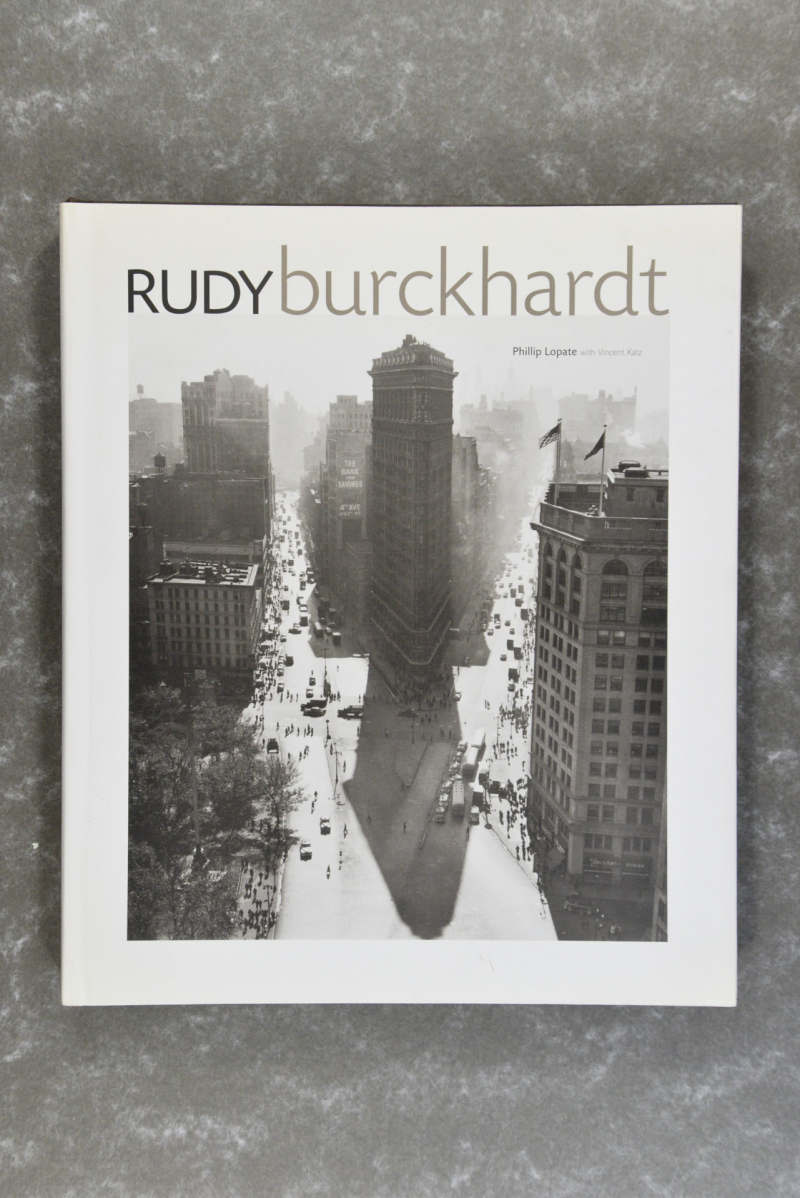 The poet John Ashbery wrote of Rudy Burckhardt in 1980: "Before there was an underground, there was Rudy Burckhardt. The genial, Swiss-born jack-of-all-trades and master of several has remained unsung for so long that he is practically a subterranean monument." Since that time Burckhardt's reputation has steadily grown - as photographer, filmmaker, and painter - beyond Manhattan's downtown community of artists in which he lived and worked. For six decades Rudy Burckhardt (1914-1999) was a discreet, but enduring, and ultimately important figure in New York's avant-garde art world.
Born in Basel, Switzerland, Burckhardt immigrated to the United States in 1935 to escape the Swiss Army and stultifying cultural and social atmosphere, to look for adventure far from home. He soon found himself sharing a loft with then companion and lifelong friend, the poet and dance critic, Edwin Denby. Willem de Kooning lived next door. (Together with Denby, Burckhardt was one of the first serious collectors of de Kooning's work.) Aaron Copland, Virgil Thompson, and Paul Bowles were good friends of his. And soon Burckhardt was embarking on a profound photographic portrait of New York City: the midday crowds in midtown Manhattan, storefronts and standpipes, Astor Place, Times Square, the Flatiron Building, the gray, water-towered regions of Chelsea, the great swath of Sixth Avenue, humble curbs, fleeting shadows, a modest studio in Brooklyn, as well as the existentialist landscapes of Astoria and Laurel Hill in Queens - with its anonymous factory buildings, empty lots, broken sidewalks, and girdered highways over cement gardens against the great veil of the Manhattan skyline. He also photographer the great painters of the New York School, from Willem de Kooning, Jackson Pollock, and Mark Rothko to Philip Guston, Larry Rivers, and Brice Marden. As well as the now classic images of New York, Burckhardt photographed London, Paris, Mediterranean cities, the segregated American South, Haiti, Trinidad, Mexico, and the forest and ferns of his summer retreats in Maine.
Over the course of his life, Burckhardt was a link between succeeding generations of artist, poets, dancers, and filmmakers. Gradually, his standing as a cultural force has been acknowledged, not only as a photographer, bur also as a maker of underground films, and, in his later years, as a painter. This book is the first comprehensive monograph on Burckhardt's photography. Author Phillip Lopate, a long-time friend of the photographer, provides an insightful and thought-provoking homage to the quiet brilliance of a national treasure. And the poet and curator, Vincent Katz, has contributed an essay further elaborating on Burckhardt's photographic achievement. Illustrated with almost three hundred photographs, Rudy Burckhardt presents the remarkable depth and range of the artist's work. The book will fascinate anyone interested in the New York art world and offers a revelation for all those interested in photography.