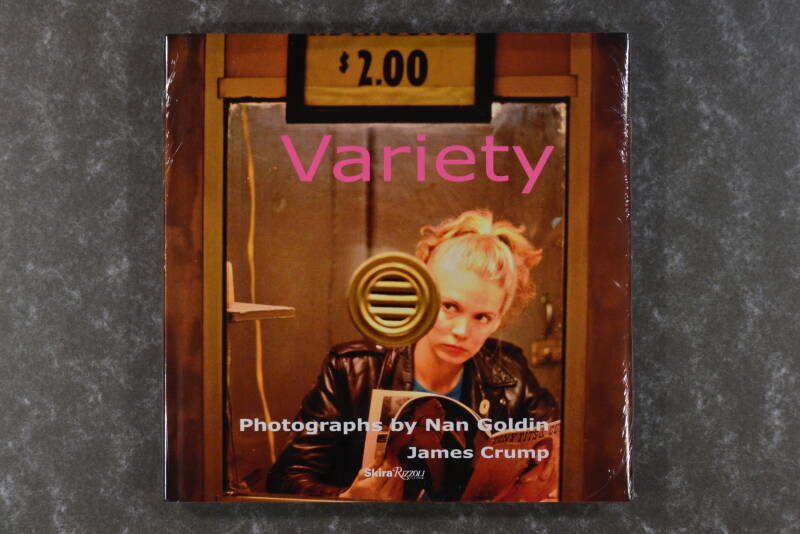 A previously unpublished and never-before-shown series of photographs taken by this highly influential artist for the 1983 film Variety;

When photographer Nan Goldin appeared on the art scene in the late 1970s, her tough, autobiographical frankness quickly established her in the all-male field of diaristic photographers. The beaten down and beaten up personages that populate Goldins work are icons now deeply inscribed in our collective memory. Variety: Photographs by Nan Goldin compiles the still photographs Goldin created for director Bette Gordons now-infamous 1983 independent film, Variety, and offers a rare glimpse into this artists symbiotic working process. Hallmarks of Goldins early work and the influence of filmmaking on Goldins prolific career are on display in this project. Hovering unsettlingly between fiction and reality, "documentary style" and art photography, Variety: Photographs by Nan Goldin reveals a curious and previously unexamined aspect of Goldins iconic career, and provides a window into the collision of music, club life, and art production that colored the Lower East Side of Manhattan.

This is an important addition to Nan Goldins oeuvre.

Recognized internationally for her intimate and compelling images, the American photographer Nan Goldin (born 1953) has lived and worked in Boston, New York, Berlin and in Paris, her current home. Since the early 1970s Goldin has taken numerous photographs of her friends and 'family', which form a significant and important body of work. She is most famous for her Ballad of Sexual Dependency photographs, a constantly changing slide show of approximately 750 photographs set to music. Goldin's life and friends became the focus of her work - a diary of friends and lovers in Europe and America, in the underground and gay scene.