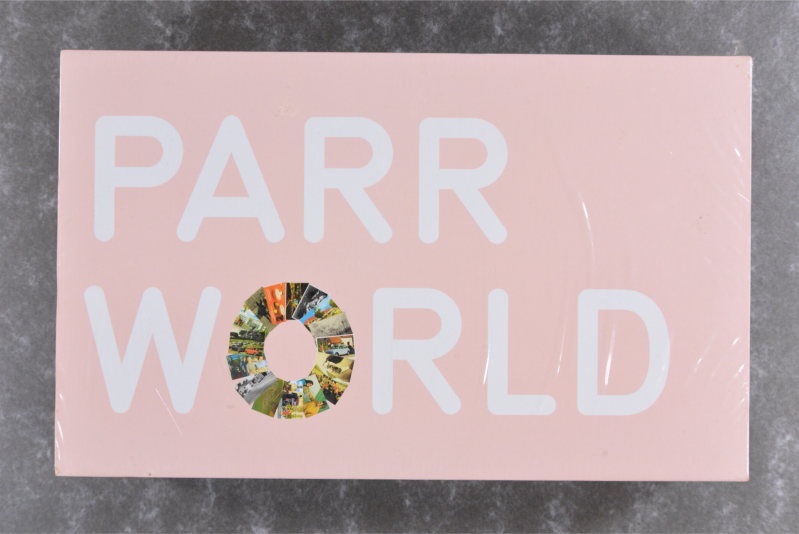 Martin Parr's vast collections of photography books and postcards are world-renowned. Unbeknownst to many, he is also an obsessive collector of photographic and themed objects. In Parrworld: Objects and Postcards, a luscious two-volume set, his affinity for focused accumulation is presented with appropriate thoroughness, and with typical Parrian humor. Some of the items in the first volume, Objects, have already achieved notoriety--for instance, the wrist watches featuring Saddam Hussein's visage. Others mythologize well-known figures such as Lenin and the Spice Girls. Then there is the kitsch--from wallpaper to trays and objects commemorating Sputnik, Charles and Di's wedding and 9/11. While Objects is the first publication to document Parr's 25-plus years of such collecting, Postcards is the "last word" on an extraordinary collection of over 20,000 cards. Presented in album format, it is a highly entertaining yet serious study of postcard history, and includes early cards that depict local news events such as car crashes and murders. The book finishes in Boring Postcards territory with a selection of cards promoting motorways and shopping.
Objects is introduced by Parr and Postcards features an introduction by Thomas Weski, curator of the companion exhibition, Parrworld. This remarkably designed set is bound to appeal to a wide audience, but in particular to Parr collectors who thought they already owned everything Parr.
Martin Parr, born in Epsom, England in 1952, is the author of more than 30 photography books, including Our True Intent Is All For Your Delight, Boring Postcards and Mexico. His photographs are held by museums worldwide, including the J. Paul Getty Museum, Los Angeles; The Museum of Modern Art, New York; and Tate Modern, London. Parr is a member of Magnum Photos.