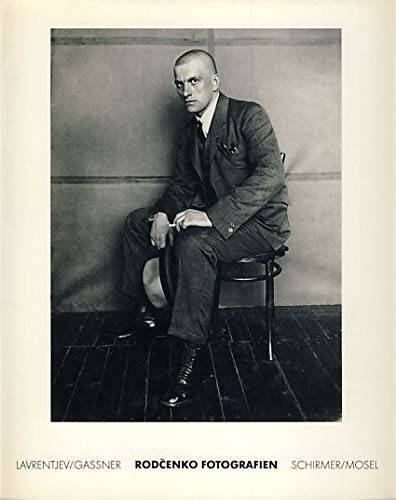 Rodcenko Fotografien (German Edition). 151 pp. text, 114 text illustrations and 159 stunning b/w gravure plates. German text. Bibliography. German text. Bibliography. Foreword by Aleksandr Lavrentjev. German with captions in English, French, and German. This monograph, from the art historian Hubertus Gassner, examines Rodchenko's constructivist photography, as the Russian avant-garde painter, sculptor, designer came to concentrate on photography after 1924. "During the early 1920s Rodchenko became increasingly aware of the possibilities of photography. Although he had employed found images in his photomontages, he began producing his own photographs only in 1924. Photography appealed to Rodchenko's Productivist aesthetic, particularly in its use of factory-made apparatus and the 'automatic' nature of image construction. Rodchenko brought to his photographs an awareness of plastic form and abstract composition, and they are noted for their use of oblique angles and emphasis on asymmetry, as in Girl with a Leica (1934; see Alexandre Rodtchenko, 1986, pl. 43), which reveals his confident organization of the image, in particular the use of the human figure as an integral part of the composition. Rodchenko's photographs were widely published, especially in the magazine SSSR na stroyke ('USSR in Construction'), although they were increasingly attacked during the 1930s as alienating. There are no photographs after 1941." from John Milner, Grove Art Online.