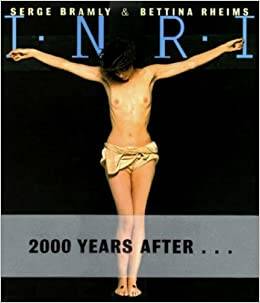 I.N.R.I.: Iesus Nazareus Rex Iuderoum; Jesus of Nazareth, King of the Jews. The story of Jesus has been continually reinvented and reinterpreted, in fact and in fiction, over the course of the last two millennia. Yet the visual iconography has remained largely that of the Renaissance. Now, at the turn of the twenty-first century, writer Serge Bramly and photographer Bettina Rheims have turned to photography -- the most contemporary of art forms -- as well as to the original biblical texts and legends to present the life and death of Jesus in a series of stunning tableaux and an evocative, meaningful text.

The words of the apostles are retold in contemporary and accessible language, at once a rereading, synthesis, transposition, and commentary on the four gospels. In the photographs, characters such as Mary and Joseph, John the Baptist, and Mary Magdalene are placed in sites ranging from the beautiful island of Majorca, Spain, to an abandoned hospital on the outskirts of Paris. Jesus' birth occurs in a rough garage, where he is attended not only by the three kings but by people drawn from the surrounding streets; his miracles and cures address the ailments of all times; the Sermon on the Mount is a dramatic piece of performance art; and his crucifixion is that of every man, and every woman. Bramly and Rheims' re-creation of the ancient story is a true modern icon.