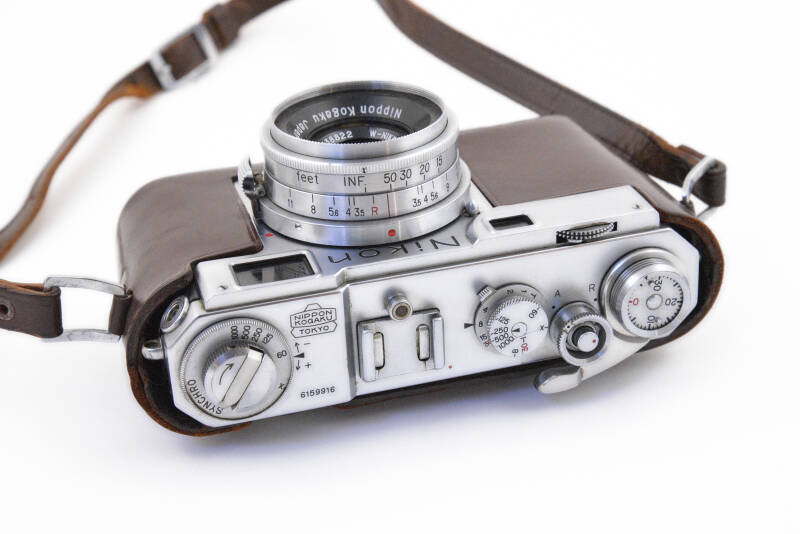 Nikon S2 was launched in December, 1954 that was not just the simple upgrade version of Nikon S but had newly designed structures and mechanisms. Nikon dealyed putting Nikon S2 on the market because of the appearance of Leica M3 which was eight months before it was first introduced.
Nikon S2 features to one-stroke ratcheted winding that was for the first time adopted on Japanese made 35mm camera with interchangable lens system, which stirred Leica very much that it was adopted on Leica M3 after all.
The picture format was changed from former 24mm x 34mm to standard 24mm x 36mm on S2. And adopting the aluminum-alloy diecast on S2 caused its body weight 75g. lighter than S without missing the durablity.
A bright frame in the Reverced Galilean finder built in S2 makes the image clearer and brighter and also, the base length of S2 is 1.7 times as long as that of former models. All these improved the accuracy of distance measurement.
Further more, S2 employs JIS-B type flash sync contact that enables S2 to synchronize all kinds of flashbulb in all speeds and electronic flash up to 1/50 sec.

Nikon S2 won high popularity not only in japan, but also in the U.S. where a sale of S2 matched to that of Leica M3. The England magazine featured S2, and also it is said that the journalists in France needed to go to the U.S. to get S2 for their articles.